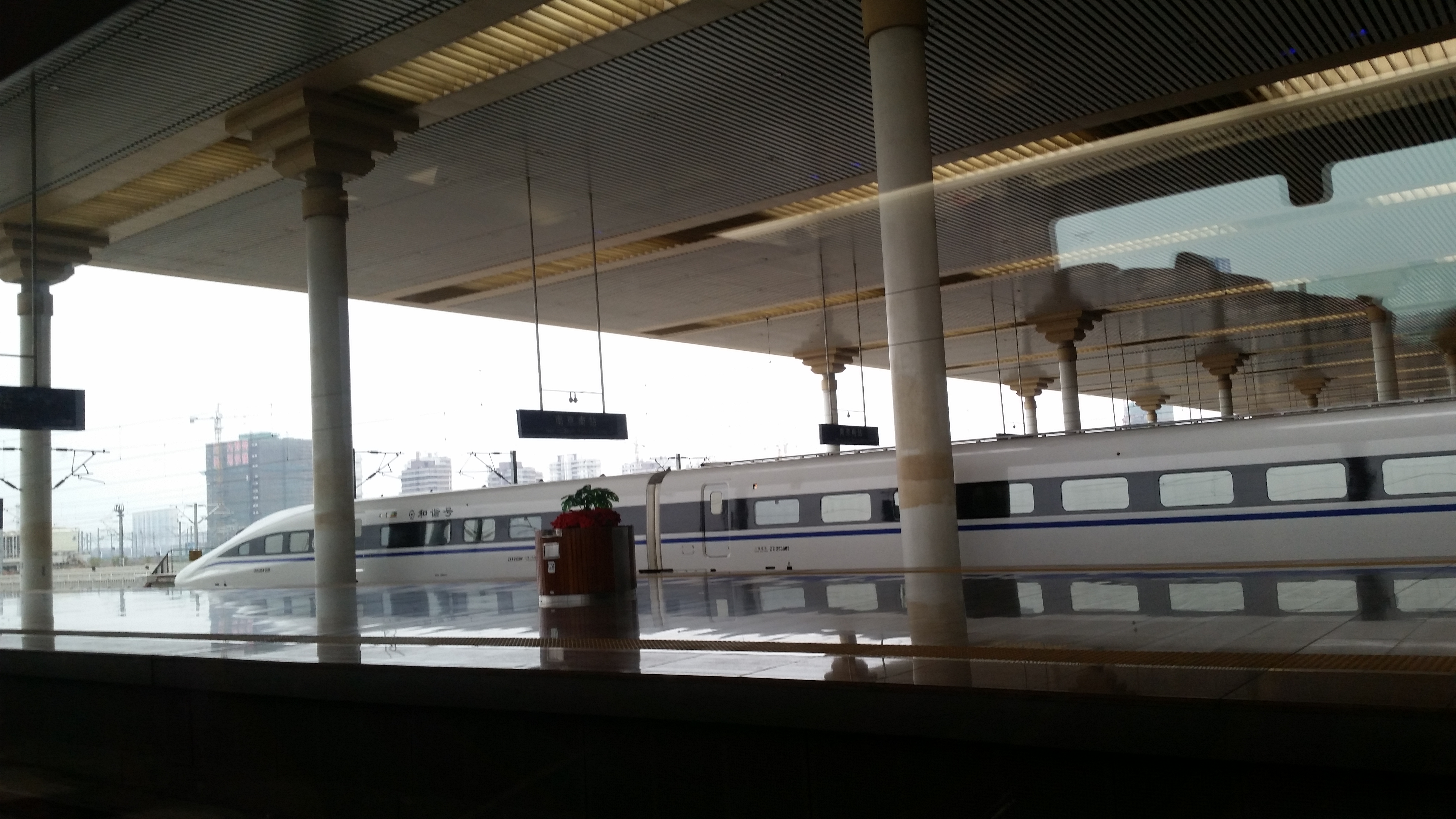 A high speed train at the Beijing South Railway Station.

I had never been on a high-speed train before. The train itself inside was much like any train you’d ride over land in America. The standard class cabins definitely cram people in however, so I would suggest at least business class tickets for a long haul.

The train station in Beijing was interesting. We were there in January and Beijing was somewhere around 20 degrees Fahrenheit. It was cold outside. Oh, and inside the station was bloody cold as well. The entrance was normal, then we hit the security line. Our Chinese traveler/actor, James, had to show his ID card to the security folks but they waived us through because I guess, we were obviously not locals. Apparently, if you lose your ID card, you can’t go anywhere in China, you can’t take the train, it’s a big deal. Getting through security was easy though, they checked our passports, scanned our bags, waived a wand around us checking for bombs maybe, who knows, and then we were on our way into the station. Now, it was suggested to my travel partner who was the producer on this trip to get tickets beforehand. This was a good thing. The trains were busy and if we hadn’t, we would not have gotten into business class. So, TRAVEL TIP, if you are taking a train between cities and want business class, buy tickets in advance. We headed to the ticket counter, showed our passports, and they gave us our tickets.

We were ready to shoot some awesome footage inside this massive station! Right after we drank some warm Starbucks coffee because they didn’t have heat in most of the building. Yes, there was no heat, especially the farther you walked from the center of the station. It was cold. So, we got our warm coffees and shot a lot of footage of James doing business like things such as walking with a suitcase, using various apps on his Microsoft phone, walking more with his suitcase, checking his phone, you get the idea. The station had a lot of cool backgrounds and “extras” for us to shoot against. I’ll say this, when you are shooting a video that is supposed to look like its in China, being IN China really helps.

Our train begins to board and we shoot James getting on it, and then doing it again, then I’m running around filming the platform and the signs before the doors are locked. It was pretty fun and while this trip was a great experience, I did work my ass off.

Okay, So we’re on the train, in our seats and I’m thinking, sweet, the train is going to shoot out of here and go 100+ miles an hour! YEAH!

Well, it’s not like an airplane, they get going a bit more slowly. In fact, it’s so gradual that you don’t notice the fact that you are now traveling along at 185mph. Yep, we got up to the 180s. It was very pleasant. The train feels much like an airplane in smooth skies, you rock back and forth a little bit but for the most part, you just go.

The ride was nice, we did quite a few shots of James doing various actions. Then he and I talked politics and he explained some of the Chinese politics. Nothing I can share here but, let’s just say they’re a lot like us, we all just want a government for the people.

We rolled through a lot of farmland that day and the pollution was really an issue. Until the day we left Beijing, the weather had been gorgeous. The cold winds had blown the pollution out of the city and we were blessed with some really nice days. The view outside the train however, was a continuous mass of fog and clouds which was a bit of a bummer after our stellar first days. We didn’t realize how special the weather had been, and that is something to note, China has pollution. It sucks.

We arrived in Shanghai, filmed our exit from the train, then made our way to get a taxi to the hotel. This was quite the experience. There was a queue, a long line that went to the taxi area. I think we walked several hundred feet in it before we reached the end. There were three of us and we had a lot of luggage. There were two guys coordinating people to taxis. James, our actor and translator, told them we needed the van (the only one there) that was across the driving lanes (there were like 4 lanes for the taxis to fill) but one guy apparently had to assert himself and try to put us in a car. At this point, my “really?” radar is going off. I witnessed this a couple of times in China but, some of them like confrontation. Not with foreigners like me (well, I’m 6’1” 205lbs) but with each other. Eventually we get the guy to realize that we have a lot of stuff that won’t fit in a small taxi. He still needs to assert his dominance though and stops us from crossing to the van, until all the other cars are gone. He was just being an asshole. Oh well, every country’s got them. Don’t let this dissuade you from your trips, I very much doubt he would have hassled us at all if I was the one doing the talking.

Anyways, we got into our taxi and off to downtown Shanghai we went! What an amazing city!